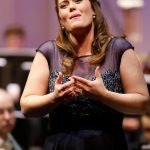 The soprano Jana Baumeister impressed the jury at the final concert of the National Singing Competition Bundeswettbewerb Gesang 2016 and won not only First Place in the competition, but also our Foundation’s special prize. Twelve out of the 250 participating singers had qualified for the final concert
of the main competition on 28 November 2016 at the Staatsoper im Schiller Theater Berlin.

The €5,000 in prize money for our Foundation’s special prize will be paid out to concert organisers who book the singer for a concert featuring the vocal music of Bach. The idea is to split the prize money into smaller amounts in order to help fund as many performances as possible.

Jana Baumeister was born in 1988 in Herrenberg and grew up in Würzburg. She began her musical training while still at school. After graduation, she studied at the Nuremberg University of Music from 2007 to 2012 and then at the Frankfurt University of Music and Performing Arts. The young soprano has sung at the Bregenzer Festspiele (Bregenz Festival) and the Rheingau Musik Festival and has been a guest performer at various concert halls, including the opera houses in Wiesbaden, Frankfurt and Trier. Since 2014 she has been a permanent ensemble member at the Staatstheater Darmstadt (Darmstadt State Theatre). She was a prize-winner at the Nuremberg Mozart Competition and has been awarded several grants.

Interested concert organisers are invited to contact the Johann Sebastian Bach Foundation directly to discuss performance options and funding requirements. The Foundation’s committees will then decide on the funding amounts and recipients.

Our Foundation’s Executive Board and Board of Trustees look forward to receiving enquiries from concert organisers and would like to thank the jury members Ingeborg Danz, Tobias Berndt, Axel Köhler and Michael Volle for their outstanding work.

Our foundation’s Board of Curators has elected retired Oberlandeskirchenrat Reinhard Kersten to the Executive Board. For the remaining term of office, he will take over the responsibilities of Mr Kocourek, who has stepped down from the    END_OF_DOCUMENT_TOKEN_TO_BE_REPLACED

This year, we joined the Association of German Foundations (Bundesverband Deutscher Stiftungen). We look forward to networking and sharing best practice with other foundations and the office of the Association.