The New Bach Society (Neue Bachgesellschaft e.V.) feels responsible for the maintenance and spreading of the music of Johann Sebastian Bach and to explore his life and influence. Therefore many Bach Festivals are held yearly all over Germany and regular publications are offered, especially the yearly Bach Yearbook which was first published in 1904.

The St. Thomas Church is one of two main churches in Leipzig’s city centre. It is a place of worship and music, home to the St. Thomas Boys Choir and the final resting-place of the famous St. Thomas Cantor Johann Sebastian Bach. He started his work in 1723 and worked there until he died in 1750.

The Thuringia Bach Festival is the largest festival of classical music in the Free State of Thuringia. Specialising in Baroque music and performing the works of Johann Sebastian Bach in authentic sites, the festival appeals to music lovers and tourists alike. 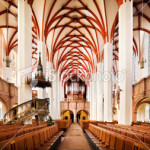